Tail Suspension was developed in the late 1980’s as an alternative to the “behavioral despair” or swim test where the animal is forced to swim in an arena with no possibility for escape. In the Tail Suspension assay, the animal is suspended from its tail for a 6 minute test (user definable) and cannot “escape.” During the test the system records the number of times (events) each subject enters into an escape behavior (struggles), the duration of the event and the average strength of each event. 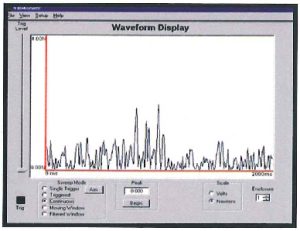 This screen display represents the actual raw data as collected.  The recording is a continuous collection of samples that are analyzed post-session.  This allows the user to re-set any parameters and re-process the data files at any future time. 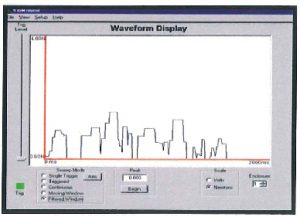 This screen display demonstrates the filtered data from a typical session.  Notice that the activity now appears to be in blocks or episodes.